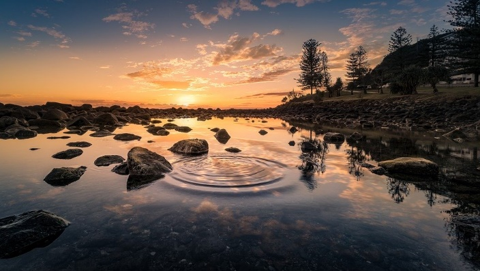 In the late 1930s a very bizarre case occurred concerning a village near lake Angikuni, a fur trapper named Joe Labella was looking for shelter for the night, and he made his way to a nearby village he knew of and when he got there all the villagers had disappeared.

The strange thing about this has everything including food and weapons had been left at the village.

Labelle contacted the Royal Mounted Canadian police and an investigation began, in the nearby village burial ground a grave was found to be empty, not the result of any animals.

Not from the village, several bodies of sledge dogs were found, they appeared to have starved to death. The strange part about this was nearby to these dogs were open stores of food. Also, there appeared strange lights above the lake at about the same time has the disappearance of the local villagers.

No one really knows but this story appeared in Frank Edwards book Stranger than Science; other versions in Whitley Strieber’s science fiction novel Majestic and Dean Koontz’s horror novel in the Sky, empty graveyards and over a thousand people missing.

Speaking of bizarre and crazy things…

Do you know what’s really crazy?

Not making sure your website has any sort of protection, especially if you think that your site hasn’t anything worth stealing or being hacked for, but the truth of the matter is websites are hacked all the time.

And do you know what?  in most instances, it’s not to actually to get hold of your data or screw up your website.

It’s even sneakier than that. The server that your website is on could be used to send spam emails, be used as a temporary webserver to serve files of an illegal nature or be part of a botnet and more.

What are the ways you can protect your website?

If you’re using WordPress on a hosting company such as SiteGround, then the only thing you need to really worry about is making sure first that any plugins you do have installed are all up to date. That WordPress is on the latest version and that you have some security plugins installed on your site.

Oh, and you have an up to date back-up of your website.

Make sure that you use a hard to guess the password, with a mix of upper- and lower-case letters, numbers and special characters such as the@ symbol. You could even go as far as setting up a 2-step authentication process for the admin login for your WordPress website.

And make sure to use different passwords for different logins.

Please feel free to leave your comments below 🙂